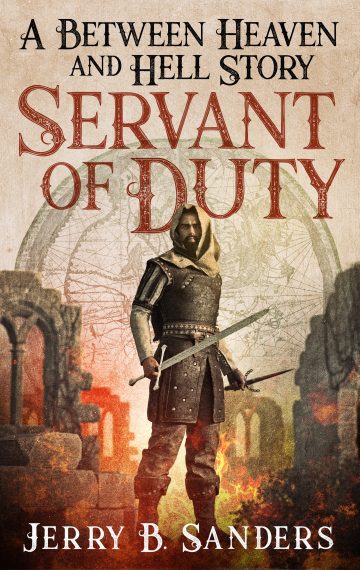 After his family dies of the Great Pestilence in 1348, Troy decides to leave England for one more try at finding someone to rid himself of his demons. His journey leads him to Africa where he endures deception by Bedouins, battles with native tribes and a rogue elephant, and forced to marry someone to save another’s life. He endures a terrible shipwreck and is imprisoned and enslaved on two continents and vows to end the evil actions of ruthless people. He is a servant of duty and against all odds, he must seek retribution against evil men and rid his home of devil worshippers despite immense dangers.

Servant of Duty follows the story that began with book one, Between Heaven and Hell. Troy Kensington is a man endowed with extraordinary abilities and longevity because of demonic possession. Servant of Duty is a continuation of his journey of discovery and towards his goal of freeing himself of his powerful and deadly evil spirits. This new journey follows him as he battles his grief, endures servitude, is forced to spill much blood, defends the helpless, and the discovery of an astounding secret.